There is an emerging view in the present crisis, illustrated in recently burgeoning commentary across the globe, expressing a realization that our present form of world order and civilization has brought humanity and “nature” into a great crisis, and that we must act radically to transform the foundations. The combination, or “triple crisis,” of the three Cs – Climate, Capitalism, and COVID-19 – has brought forward a momentum to address the fundamental causes of this crisis.

Living in a time of Koyaanisqatsi

The Hopi people of North America have an important myth with great relevance for our present situation: the myth of “Koyaanisqatsi,” often translated as “life out of balance,” “a form of life that should not exist,” or “a crazy life.” In this myth, human beings are custodians for all life, and our purpose is to maintain the balance among all forms of life, perpetually. To do so, we ourselves must maintain a way of life that ensures harmony with all other forms of life. In Koyaanisqatsi however, human beings have “lost their head,” and run aimlessly towards a precipice of destruction brought about by their own actions. Such a culture disregards the fundamental unity and interconnectedness of life. It forgets the sacredness of all life. It forgets its own true purpose, and it forgets the profound interdependence of human beings with other forms of life. Its actions are “mindless” and destructive. Only a truly profound spiritual awakening and cultural and material renewal can alter the course of such a culture, and save it and myriad other life forms from the great harm and destruction that Koyaanisqatsi will inevitably bring. 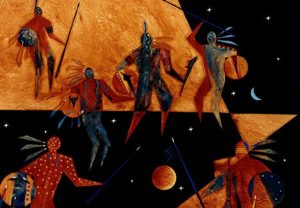 We are living in a time of Koyaanisqatsi. We have been under the spell of totalizing concepts, such as “progress,” “modernity,” “development,” and “globalization.” They have promised us a better future. They have promised us material prosperity, a future age of health, safety, freedom. The truth, however, is that they have masked historical processes that have led to this present global crisis.

The study of the “fall of civilizations” and of “existential threats or challenges” to humanity is now increasingly academically legitimated and even becoming “popular.” That phenomenon is symptomatic of the situation we now find ourselves in: i.e., that we are living through a “great implosion,” a “world system crisis,” a “general crisis” of our dominant form of civilization. Many causes can be identified for this “general crisis,” this “great decline,” which even threatens us with the “collapse” of civilization. Climate change is of course a central causal vector of this great crisis, but it is not the only one, and in many ways, climate change itself is the consequence of much more fundamental, underlying, and long-term historical processes. The historical processes that have induced this great crisis include the over-concentration of wealth (oligarchization); the over-exploitation of labor and “nature” (i.e., the over-extraction of value from human labor and from the natural world, thus increasing systemic entropy); parasitic and predatory accumulation of capital and wealth surplus and “under-investment” in socially useful and productive infrastructure; and a systemic logic of/obsession with commodification, marketization, and “economic growth.”

Our dominant economics, as both academic discipline and real practice, has perpetuated the delusion that somehow the economy is without ultimate biophysical foundations or limits. The environment or environmental economics is but a minor sub-field in mainstream economics, and all environmental problems created in the present by the dominant economic system are believed to be solvable in the future, primarily through technological innovation and via market-conforming principles and mechanisms. This blinkered and Panglossian worldview has already for decades caused seemingly endless complacency, delay, and deferral by the most powerful economic and political actors in the world in regard to radically addressing the changes necessary to avert impending climate and ecological catastrophe. This Panglossian worldview and the worship of the “market” has become the dominant faith of the age and has been central to the globally hegemonic ideas of “neoliberalism,” “globalization,” and even “development” as understood and practiced across the globe.

Crisis means breakdown. Crisis means system failure. Crisis in the world today means an existential threat to humanity: the “fall” or even the collapse of our civilization, a civilization that globalization has supposedly made an unprecedented success.

What is the solution? Koyaanisqatsi holds the answer to our riddle. We need a “deep restoration” of our civilization, of our entire culture, both spiritual and material – a notion I elaborate in my article published in Globalizations in 2020. We need to “reimagine civilization.” The fundamental forms which constitute the dominant templates of power and social organization in our civilization: i.e., the state, capital, and the city must be profoundly reimagined and radically altered in our future. Humanity must accept its embeddedness in the web of life and fully recognize the reality of planetary boundaries, earth system dynamics, biophysical foundations, and biophysical limits, ecological and climate change thresholds and tipping points, in what in reality is a unified global system of life. Our future course must consist of a “great restoration” of life on earth, in all its immense and beautiful diversity. Thus, it must also consist of a “great reversal” of the obsessions of universal commodification, marketization, and economic growth that have hitherto been dominating our collective material life. “Re-commoning” of the world, both material and social, will be central to this great transformation of civilization. Peace, both domestic and global, will likewise be an essential element in a renewed and reimagined civilization. The age of darkness of the past few centuries, rife with imperialism, colonialism, neocolonialism, racism, and patriarchal power, should now close.

History is written later, but the future is written now. The new worldview emerging in the context of the present global systemic crisis is in fact resonant with a very ancient worldview. The idea of perpetuating the lost pre-COVID-19 “normal” is but a great illusion. The idea of returning to “business as usual” is an inevitably catastrophic idea. Only a radical transformation of the fundamental forms of our civilization will be sufficient to avert future disasters. Transformative praxis of the many, by the many, and for the many, holds the only realistic promise and source of hope for our collective survival. Now there can be no more excuses, and no turning back.