Just after our Globalizations “Global Climate Emergency” special editorial essay was published, the IPCC released yet another devastating report.

According to this most recent IPPC special report on oceans and the cryosphere (the frozen parts of the planet), the average global sea level rose by 15 cm during the 20th century, but if carbon emissions do not reduce sufficiently to achieve the COP21 Paris goal of 1.50C then sea level rises could exceed 1 meter by the end of the century, and 5.4 meters by 2300 under “high emissions scenarios”. Not only would this threaten coastal populations (and many of our megacities are coastal), the change to oxygen levels and acidity of the oceans would have dire consequences for ecosystems. This is yet more evidence of the urgency of our situation.

The contents of the report contribute yet more “facts in waiting”,  i.e. consequences that will follow if we do not urgently heed the warnings of climate scientists and activists. Greta Thunberg’s impassioned speech to the UN Climate Action Summit in New York provides yet another focal point for much needed global publicity regarding the scale of the challenges before us.

The challenge is underscored by the UNEP introduction to the 2019 10-year summary of Emissions Gap Reports:

At first glance, the news seems bleak. The world would seem to have spent the last decade doing the exact opposite of what it should. Despite the warnings in each year’s gap report, greenhouse gas emissions grew at an average of 1.6 per cent per year from 2008 to 2017. In fact, these emissions are now almost exactly what early gap reports projected they would be in 2020 if the world did nothing to change its brown, polluting growth models. With the policies currently in place, the world is heading for a 3.5°C temperature increase this century, compared to pre-industrial levels 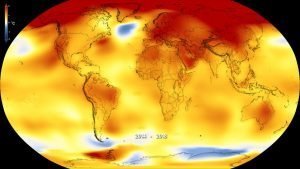 As this year’s 6th UN Global Environmental Outlook Report also confirms, the evidence of a direction of travel for our climate and ecosystems is clear. Collectively, as a planet pervading population (one divided by gross levels of inequality in wealth and consumption) we have continued to do unsustainable things in the name of “sustainable development” and economic growth. There are many ways to express this direction of travel – each provides some evidence. For example, our Ecological Footprint. This provides evidence of a tendency, but as both Clive Spash and Ville Lähde note, if anything, the technical procedures and focus of this measurement system underestimate the scope of the problem. Global levels of consumption of resources and the destruction of natural environments and ecosystems are clearly unsustainably high.

However, like the IPCC, UNEP, Greenpeace, Extinction Rebellion and many more continue to state: it is not too late for meaningful action to be taken. Although the 10-year summary of Emissions Gap Reports paints an initially bleak picture, it too argues in favor of urgent constructive changes. The consensus still holds that if sufficiently mobilized, we have the means to address the problems we have created; we, in fact, do have the potential to prevent the disaster that “facts in waiting” represent. In our special editorial essay, we listed several of these things that might be done. The fifth was to support carbon taxes, and the last was to support collective transnational solutions to our planetary dilemma. As Heikki Patomäki has pointed out, it might have been preferable to explicitly conjoin these two, since climate change is a global problem requiring globally coordinated solutions.

There are, then, many current initiatives deserving of support. We should also not neglect that places are where policies happen, and whilst it is possible to work around and not wait upon government and corporations, it is also imperative to place pressure on them. It is important to note that more than eighty percent of global GHG emissions derived from the G20 countries. So, the climate problem may be planetary, but its sources derive much more from some places than others. As loci of power and sources of climate change problems, both the USA and China are extremely important. What China, as “the factory of the world”, for example, does in the near future is of very great importance, and this cannot neglect the scope for its workforce to express themselves.[1] And whilst it would be reckless to think that we can simply rely on new technologies to resolve our problems (the proverbial “technological fix”) it is also manifestly the case that new technologies and investment must be part of global solutions. It seems incontrovertible that the scale of our economies must be smaller in terms of the demand for natural resources, but this is different than suppressing human creativity or well-being. This change is needed more than ever, but it too must be ecologically sensitive. Neoliberalism, even one advocating “Green Growth”, remains untenable. There are many potentially transformative technologies that are imminent. Yet the “fourth industrial revolution so far, abounds with contradictions.

Globalizations first hosted an editorial on the Climate Emergency over a decade ago. Let us hope that in 2030 we are able to look back on a decade of real progress, not back to a fatal scenario of business as usual. Let us now do everything within our capacity to construct a liveable future for ourselves and all other living creatures on earth. If we are to do so, we must avoid falling into the primary fallacy of surrendering now in the face of the scale of the challenge. Costa Rica has set the global standard for national de-carbonization planning and implementation. The planetary aim is urgent rapid and massive reductions in carbon emissions by 2030 and net zero emissions by mid-century. We live in disaggregated systems with multiple centers of power and influence. No single authority is in charge (arguably neither at a national or global scale) and it can seem as though others are better positioned to do what is required. But this is the fallacy: if we delay or do nothing and delegate responsibility to others, then we are potentially the difference between net zero and the emissions that produce a tipping point. The situation is not one ripe for self-interested disabling “Game Theory” articulated results, where no one acts because “why should they” (we are too small, too insignificant) – the fundamental interest of all is the interest of all, individually and collectively. Greta Thunberg epitomizes this spirit of resistance and positive transformative action. We must all now do whatever we can, because every small action, every positive something, is one more step towards us collectively and cumulatively meeting the challenges we face. Greenhouse gas emissions must be halved by 2030 and the Paris NDCs must improve by at least a third. We don’t have a decade to begin to do this, we have a decade to achieve this. Action starts now. In acting, we radically transform the world.