COVID-19 has shown that radical transformations are not only possible but unavoidable to prevent greater implosions. Living through a slow- or de-growth status – where collective “well-living” is gaining primacy over hedonistic well-being – has awakened us to the implausibility of returning to the old normal. Now is the time to quarantine our minds from the fatal cognitive virus of the capitalistic myth of “There Is No Alternative.” Though painful, lockdowns provide moments of reflection on where we are, how we have reached here, and what we can do to unite our creative imaginations and political actions to shape the post-pandemic world.

In a nutshell, in the absence of worldwide radical, comprehensive actions, we humans are on the road to a full-fledged civilizational collapse. The collapse is most likely a spiral of cascading interrelated catastrophic events: regional climate calamities, global pandemics, economic recessions, severe food, water, and energy crises leading to mass displacements and unrests, global conflicts and civil wars, more severe climate catastrophes, and the acceleration of the current biodiversity downfall.

How did we get here?

To cut a long story short, a specific form of “civilization” originated from European colonialism entangled with modern capitalism gained full global ascendency in recent decades. This world civilization system is characterized by its foundational dependence on: (1) Capital replacing labor as the ultimate source of value; (2) Carbon – fossil fuels or more generally speaking, extractivism; (3) Compulsive economic growth through relentless commodification of socio-ecological relations and a multi-century mass appropriation of the commons, sustained through the constant promotion of consumerist cultures across the world; (4) Coloniality, i.e. the ongoing stratifying power relations and epistemes necessary for maintaining the integrity of intersectional hierarchies; and finally (5) Corruptive politics, energized by the rise of monopoly-finance capital, corporate-state interest-driven advances in surveillance, datafication, bio- and neuro-technology, and warfare. Let’s call the above five intrinsic characteristics, the 5Cs.

The system is inherently crisis-prone since the 5Cs require an endless expansion of the planet’s capacity. Since we have already passed the earth’s biocapacity, and with no present technological solutions on the horizon that can retain this capacity, the same characteristics behind the ascendency of modern civilization are now contributors to its demise.

De-carbonization is not enough

Ending any of the above dependencies without challenging the rest of them is doomed. Take the examples of de-carbonization as the most popular solution propagated by progressive institutions. New technologies that harness renewable sources face serious socio-political and economic obstacles. Their rate of progression is too slow to save the planet. More importantly, they are perceived by sections of the ruling class as a potential means of extending capital’s hegemony.

The so-called post-carbon policies only stretch the system’s dependence on the rest of the 5Cs, instead of ending it. The underlying socioeconomic and biopolitical structures, on which the technological revolutions are based and to which they contribute, must be profoundly challenged so that meaningful transition can be owned and guided by the multitudes. This necessitates not only (1) De-carbonization, but also (2) De-capitalization, (3) De-growth, (4) Decolonization, and (5) Deep democratization of social institutions; i.e. the 5Ds of a global struggle to save organized life. Thus, de-carbonization, if perceived as an adequate solution, will function as a distraction from the rest of the equally important Ds. 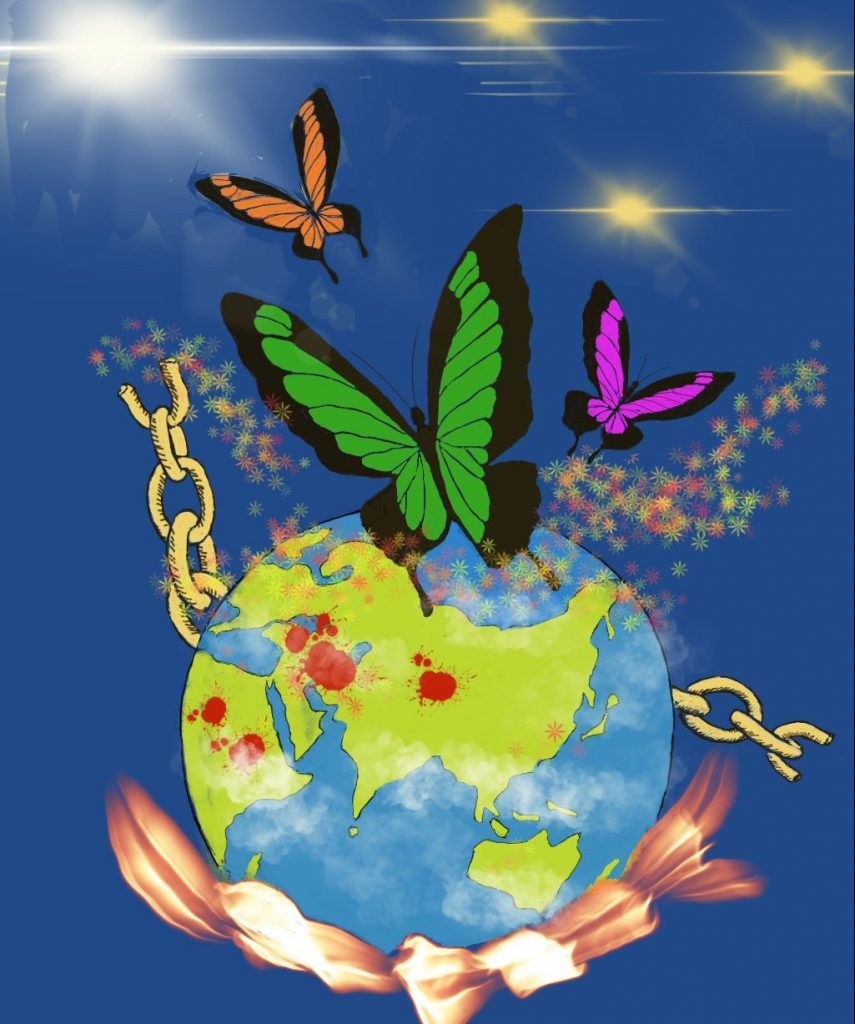 What can we, as activist academics, do?

The most noticeable form of the reductionist approach to addressing global crises is the recent resurrection of political technocracy. The more it fails the more it becomes authoritarian. Universities, as hotbeds of innovation and cutting-edge knowledge, are losing their autonomy to their corporate industry and business partners which now are often their major sources of support in the age of austerity. Humanities and Social Sciences (HASS) is facing an identity crisis. It needs to find a non-reductionist discourse in which HASS can restore its lost historical purpose. A “radical transformative scholarship” needs to be reinvented to focus on liberating praxes for progressive alternatives (as showcased by the authors of The Routledge Handbook of Transformative Global Studies).

In response to ineffective technocratic solutions, we have recently witnessed an explosion of self-motivated communal creativities and grassroots projects pushing for more meaningful systemic transitions in a vast array of forms. The historical necessity of a deep civilizational shift is well understood by a growing number of 5Ds movements.

The 2020s can be regarded as the most pivotal decade in the most critical century in human history where “demanding the impossible” becomes the only “realistic” option for emerging revolutionary forces. The current conjuncture characterized by intensifying economic and ecobiological crises will most likely translate into unprecedented discontent. In our epoch, we have reached a status where anomalies between theory and reality can no longer be resolved without obtaining insights from radical forces on the ground.

However, these forces are diverse, unstructured, and fast-evolving, making them difficult to comprehend. Only recently, thanks to the pandemic-induced lockdowns and slowdowns, an unprecedented opportunity has emerged for these transformative forces to surface through online engagements with their broader populations. Despite the liberating potentialities of the 5Ds landscape, regretfully, it is still a marginal topic in HASS.

The necessity of co-creating knowledge commons

The most striking question we face in our engagements with the 5Ds is how to “co-develop” an inclusive yet dynamic knowledge of the emerging landscape of alternatives; a knowledge that in turn empowers these transformational actors and practices and helps us reinvent our scholarships as transformative. There is no reason to believe that the intensification of crises will automatically result in the collapse of unproductive divisions in the global left. The expectation that out of the marketplace of contingent interactions between countless forms of the 5Ds, somehow magically a new paradigm will arise that ends capitalism before it ends planetary life ironically resembles the neoclassical myth of invisible hands and the trickle-down fairy tale.

In the current context where interests, rights, and needs of communities are undermined by the preferences of Capital, it remains vital for progressive socio-political endeavors, concerned with building sustainable, self-sufficient, just, and democratic futures, to resist and reverse the capitalist knowledge enclosures. Without submitting ourselves to a technocratic mentality in HASS, recent methodological advances in social informatics can be conscientiously employed to empower the liberating praxes on the ground. The power of big data can be harnessed to co-create “knowledge commons” with grassroots movements, to guide and energize an inclusive transition to post-5Cs eco-civilizations.